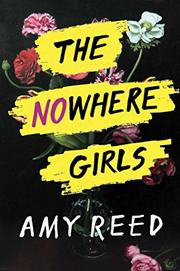 Three misfits come together to avenge the rape of a fellow classmate and in the process trigger a change in the misogynist culture at their high school transforming the lives of everyone around them in this searing and timely story.

Who are the Nowhere Girls?

They’re everygirl. But they start with just three:

Grace Salter is the new girl in town, whose family was run out of their former community after her southern Baptist preacher mom turned into a radical liberal after falling off a horse and bumping her head.

Rosina Suarez is the queer punk girl in a conservative Mexican immigrant family, who dreams of a life playing music instead of babysitting her gaggle of cousins and waitressing at her uncle’s restaurant.

Erin Delillo is obsessed with two things: marine biology and Star Trek: The Next Generation, but they aren’t enough to distract her from her suspicion that she may in fact be an android.

When Grace learns that Lucy Moynihan, the former occupant of her new home, was run out of town for having accused the popular guys at school of gang rape, she’s incensed that Lucy never had justice. For their own personal reasons, Rosina and Erin feel equally deeply about Lucy’s tragedy, so they form an anonymous group of girls at Prescott High to resist the sexist culture at their school, which includes boycotting sex of any kind with the male students.

Told in alternating perspectives, this groundbreaking novel is an indictment of rape culture and explores with bold honesty the deepest questions about teen girls and sexuality.

Grace has moved to Prescott, Oregon, and finds words of searing agony and sorrow carved into the wall of her new room and carving their hurricane path through her mind, pushing everything out of its way. Grace’s classmates, Rosina Suarez, a Mexican-American queer punk rocker, and Erin DeLillo, a girl with Asperger’s, explain that the former occupant was Lucy, a girl who was driven out of town after she accused a group of popular jocks in her school of gang rape.

Now that Grace had named Lucy’s anguish, it hung from everything, clinging like spiderwebs, unavoidable. She refuses to falter into painful silence and let the truth of what had happened to Lucy die like a song with no one left to sing it. Together with Rosina and Erin, Grace creates an anonymous group, “the Nowhere Girls”, as a call to arms for all the girls who were forced to remain still, stifled, and quiet, their pain always passing unremarked, by a system who didn’t care. A system that instead built a monument to their abusers’ crimes.

How long would the town cling to their denial, trying to cover these boys’ crimes as if with some threadbare blanket? How long until enough is enough?

“The things is,” Rosina says, “people don’t want to hear something that’ll make their lives more difficult, even if it’s the truth. People hate having to change the way they see things. So instead of admitting the world is ugly, they shit on the messenger for telling them about it.”

The Nowhere Girls is about the quiet competence and determination of young women doing remarkable things without knowing first that they can do them. Women taking a stand, linking arms with other women, advocating on behalf of one another to effect change, their ferocity softening not a whit. Women standing shoulder to shoulder, each seeing hope, a mirror of their own, brightened like newly burnished stones that had been muted under dust. Women who were still healing from things they don’t talk about, gathering up the silence like a mantle and carrying it along with them, step by step, until they’ve had enough.

Women on their journey to understand the magnitude of their own hearts, fierce and terrifyingly brave.

This story has an angry, deeply wounded heart that screams for your attention. Amy Reed speaks the unspeakable. She turns despair and triumph and rage into words, into something so visceral, something we can understand—and relate to. The Nowhere Girls felt like the physical manifestation of all the little words a lot of us have held in instead of speaking them—they sat burning on the back of our tongues like poison, ready to spew into the world. The truth of it was just overwhelming, an immensity that my mind fought to take in. As I was reading, a wave of emotion surged through me and it wasn’t anger, and it wasn’t hate. It was just this deep unnameable ache that I still can’t quite articulate.

The Nowhere Girls centers around three characters who are opposites, their struggle in each other’s environment equal, but its spirit crosses racial boundaries with an intersectional ease. The points of views were raw and sharp by turns; the chorus “Us” of unnamed characters in particular struck deep chords in me, as it represents all the demographic of women who have survived, thrived, and continue to exist even through society’s collective refusal to recognize and acknowledge their stories. In their despair, they were lost in the same darkness, breathing the same air, shrinking and expanding, going beyond the boundaries of the small spaces the world often leaves for them.

This is a book about feminism. It’s about liberation for all women, and an end of the oppression of all women, including women of color, trans women, disabled women, and queer women. It acknowledges that the patriarchy hurts us all, and it urges all of us towards working with an intersectional perspective to redress inequity, and always taking personal accountability for the ways in which our own words and decisions help perpetuate the culture we are fighting against.

The Nowhere Girls is horrifying, magnificent, utterly unvarnished. It’s one of those books you yearn to talk about with people, so faceted and powerful and unapologetic they are, so dangerously aslant our own day-to-day grinds. This entire review simply underscores how much sumptuous detail and dimensionality the author packed into her book—you just have to read it for yourself.

“Silence does not mean yes. No can be thought and felt but never said. It can be screamed silently on the inside. It can be in the wordless stone of a clenched fist, fingernails digging into palm. Her lips sealed. Her eyes closed. His body just taking, never asking, never taught to question silence.”

8 thoughts on “Review: The Nowhere Girls by Amy Reed”