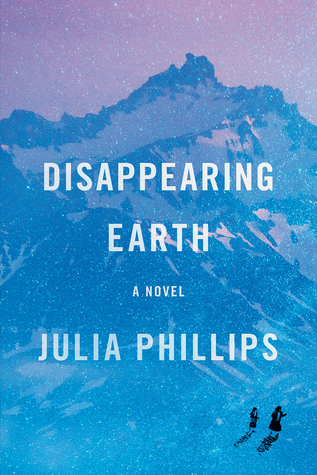 One August afternoon, on the shoreline of the Kamchatka peninsula at the northeastern tip of Russia, two girls – sisters, ages eight and eleven – go missing. The police investigation that follows turns up nothing. In the girls’ tightly-woven community, everyone must grapple with the loss. But the fear and danger of their disappearance is felt most profoundly among the women of this isolated place.

Taking us one chapter per month across a year on Kamchatka, this powerful novel connects the lives of characters changed by the sisters’ abduction: a witness, a neighbor, a detective, a mother. Theirs is an ethnically diverse population in which racial tensions simmer, and so-called “natives” are often suspected of the worst. As the story radiates from the peninsula’s capital city to its rural north, we are brought to places of astonishing beauty: densely wooded forests, open expanses of tundra, soaring volcanoes, and glassy seas.

The correct response to the ending of this book is a violently whispered, “fuck.”

Reading the last couple chapters, it felt like my heart sprang into my throat and seemed to hang there, hammering. Five thousand sentences sprinted through my mind and none of them got to the finish tape. It was as though the blanket of shock that had muted the events of this book was suddenly thrown off, and flooding my senses, was a seethe of feelings: dread, fear, hope, relief, each entangled in the roots of the others.

Julia Phillips, hence, does not make it easy on the reviewer charged with describing her book. The first chapter opens with two young sisters—Alyona and Sophia Golosovskaya, ages 11 and 8—soaking up the sun one August afternoon at the edge of a bay in far eastern Russia’s Kamchatka Peninsula. By chapter’s end where the sisters had been there was naught but absence, like a rift in the world where something precious had been and then was lost. They’ve disappeared like windblown ghosts—lured, it seems, into a strange man’s shiny black car.

From there, Disappearing Earth departs radically and refreshingly from the expected. The novel breaks into a dozen story lines, told by a dozen narrators, over the span of a year, and by pivoting so quickly, the author throws the reader utterly off guard. Don’t expect this book to rush forth with a brimming cup of answers. Phillips is in no hurry to cut to the chase, and the novel is less concerned with solving the mystery, and more preoccupied with bringing readers deep into the interior lives of the women who were, directly or indirectly, affected by the tragedy—like tossing a stone into a pond and watching the ripple pass across its surface.

The novel does little to clarify how all the characters fit together. At first, at least, it’s markedly confusing, and the reader has no way of knowing how many more pages they would have of this purgatorial existence before an answer is dragged to the fore. Disappearing Earth is rather like a puzzle that you must try to piece together by figuring out how the characters will ultimately relate to one another. Throughout, I was dogged by the feeling that there was something important I wasn’t paying attention to, and the epic converging of plotlines at the end cut straight through the whirlwind in my mind, leaving me with an ache in my chest from emotions that wouldn’t fit right.

The novel’s big triumph, however, lies in its expert evocation of life in Russia’s isolated, volcano-studded Kamchatka Peninsula, and then intricately tying it to the brilliantly rendered characters. In vivid flashes of imagery, Phillips lays bare the foibles of the town’s life, with its seasons, hardships, beauties, and latent violence boiling beneath the surface. Her sense of place is undeniably acute, but it is the author’s attention and control of an unwieldy cast of characters and the relationships that are shaped by this unforgiving, magnificent landscape that stuck fast, smoldering, as if branded by fire, onto the surface of my thoughts. Phillips fits big emotion and big thought into each chapter, each story. Everything the reader could want to know about the novel’s complex—sometimes even detestable—characters is laid out in these accounts. Their physicality is heavy and palpable, and you know right away where every character fits, both in the sense of where society has put them and where they’d rather be. It’s what kicks an adequate mystery into something much more, and I was left genuinely impressed.

The exploration of cultural misogyny also manifests itself in clever, subtle ways throughout—and it’s both otherworldly and harrowingly recognizable, like turning a corner and unexpectedly meeting your own gaze in a mirror. Phillips plunges the reader into the broken shards of the violence permeating women’s lives, and it’s like a living thing slowly taking shape between the pages. In that sense, Phillips is a feminist writer, although she lets her novel audaciously spell out the message.

Disappearing Earth brims with stories about women, in some way or another, struggling from the webbing of society, desperate to escape the sour smell of shame and judgment that settles like ash over their lives. A single mother who’s lost her daughters and is seeing the pity and scorn on everyone’s faces, and feeling it in the rawness of her flesh and the ache of her every movement. A college student unwittingly stuck in an abusive relationship that was as cramped and airless as a coffin, and she could barely breathe or move in it. Another unwed mother consumed by a general sense of dread and imprisonment within her boyfriend’s “garbage palace of a rental house” and so she leaves, her daughter in tow, hoping to burn her past like the fuse on a stick of dynamite but resignedly discovers that she only has enough money to make it to her parents’ house. A twice-widowed woman whose grief was a feeling weighted with stones, as if she were falling into ocean depths. Another young woman in a party, surrounded by drunk men, feeling the fear rising in her, sudden and sharp, for her friend after she spoke freely of breaking up with her girlfriend. Another missing girl; only this time her disappearance is only met with a pitying shake of the head, because she was not white, and she had a “reputation”.

The experiences of these women, each different, is somehow as familiar as one’s own skin. The kidnapping of the Golosovskaya sisters is always there, a shimmering apparition in the corner of their lives, always obtruding at the corners of their vision, and all of them are wearying under the burden of the reminder that “if you aren’t doing what you’re supposed to, if you let your guard down, they will come for you.”

You believe that you keep yourself safe, she thought. You lock up your mind and guard your reactions so nobody, not an interrogator or a parent or a friend, will break in. You earn a graduate degree and a good position. You keep your savings in a foreign currency and you pay your bills on time. When your colleagues ask you about your home life, you don’t answer. You work harder. You exercise. Your clothing flatters. You keep the edge of your affection sharp, a knife, so that those near you know to handle it carefully. You think you established some protection and then you discover that you endangered yourself to everyone you ever met.

Disappearing Earth has a profoundly emotional, universal core. This deeply meditative, heart-rending tale is stunningly original and a remarkable achievement. Not to be missed!