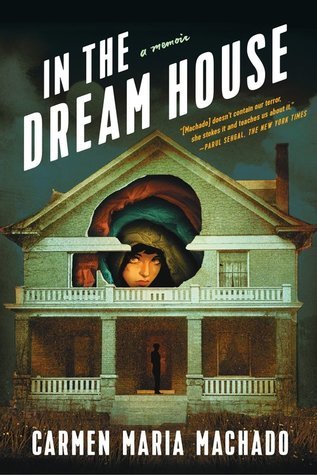 For years Carmen Maria Machado has struggled to articulate her experiences in an abusive same-sex relationship. In this extraordinarily candid and radically inventive memoir, Machado tackles a dark and difficult subject with wit, inventiveness and an inquiring spirit, as she uses a series of narrative tropes—including classic horror themes—to create an entirely unique piece of work which is destined to become an instant classic.

“If you need this book, it is for you”, so opens Machado’s star-bright and exquisitely crafted memoir, “In the Dream House”, the words like a hand on the reader’s back.

Very few works of writing are more fraught, more tremulous and dauntless, than a memoir. It’s mental self-flagellation: the prying open of one’s life, the splitting of the past like a cracked egg. To trap yourself in the mirrored halls of your own memory. The equivalent of digging a nail into an open sore.

Writers like Machado offer up their ability to communicate the inexpressible through language. But it isn’t an easy feat—“putting language to something for which you have no language.” Machado couldn’t find a language for her wordless agony, and like many other queer people in abusive same-sex relationships, she’s had to gather up the silence like a mantle and carry it along with her, step by step. Hers, like many others, was a story like a cry into empty space, no walls to throw an echo back. That is “the violence of the archive”, Machado says, how it wells up and pulls those stories under, in ways foreseen and unforeseen, as often denied as acknowledged. How its trumpets of silence—when blown—can blast a blanket of quiet loud enough to smother queer relationship trauma.

In her memoir, Machado joins her account to the ones before her, long kept under a pall of silence. Into this “archival silence”, Machado screams, and the sound crashes, breaks like a wave and floods the pages with all the force of the ocean.

In every sense, this is quite a piece of work. Machado audaciously pushes the boundaries of the memoir form, reshaping the very definition of it to suit the thrumming drum of her remembrance. And once unearthed, there is no containing the memories. The words whip out of Machado like a spirit breaking free of the skin that restrains it, and that restlessness is echoed in the way the chapters are broken apart and re-formed and siphoned into a series of vignettes, translated into narrative traditions (romance novel, stoner comedy, road trip, self-help bestseller) and literary tropes (Unreliable Narrator, Pathetic Fallacy, Choose Your Own Adventure). “I broke the stories down,” Machado writes, “because I was breaking down and didn’t know what else to do.”

“In the Dream House” is frequently footnoted too, with Machado accounting fairy tale motifs as they occur as flawlessly as Homer accounted his dactyls, jabbing a dose of eerie fantasy into the memoir—reflecting, perhaps, the war that stirred in Machado between belief and disbelief as her relationship with her abusive ex-girlfriend turned from rocky to surreal to dysfunctional. It’s an unusual structure, but Machado carries off with dazzling aplomb. She also occasionally breaks from first-person narration to address a “you”, a younger Machado from the past. This has the potential to be gimmicky, but the author does it to genuinely good effect: the “I” is grounded in the present, while the “you” gives the sense of being past everything, of looking back at land from an ice floe drifted out to sea.

Above all, “In the Dream House” is a powerful illustration of the ways that abusers know how to show themselves to best advantage, how to cast their victims into shadow and doubt, their tactics seemingly so simple, with no art to them, which of course is art.

Machado understood very keenly how it is to receive a love you could not understand why you were worthy of it. Sorrow for her dragged at me, bearing me down, as her ex-girlfriend—the woman from the Dream House—picked up with quick and unflagging instinct the traces of everything in the world Machado was most insecure about, how she liked to raise her hopes with a look and break them with another. The manipulation, the gaslighting, and here a chapter called Choose Your Own Adventure, an exercise in futility as Machado struggles to follow the complex footwork that led them to that dysfunctional conversational pivot. The carefully curated insults falling like granite, against which soft things might smash and be broken, and the following kindnesses that stung worse than cruelty would have done. That impulse, too: to keep it inside, to hide it—in the raw hope that burying it all away will diminish its power and give it a less vital and terrible form. How easy it could all be forgotten, distilled into habit and convenience. “Sit with this,” Machado urges herself, “don’t forget it’s happening.” Later, an understanding, like a thumb pressed to her throat: “This is not normal. This is not normal. This is not normal.” There are no bounds to how many emotional octaves the author can reach, and my heart felt as raw as a burn by the end.

As we plow ahead, barreling toward the closing pages, Machado writes—paraphrasing the final lines of a Panamanian folktale—“my tale goes only to here; it ends, and the wind carries it off to you”. The story might be over, but for many readers—who could say none of their own, but saved it in their chests, where it did not need to be spoken—it will echo on and on.

One thought on “Review: In the Dream House by Carmen Maria Machado”